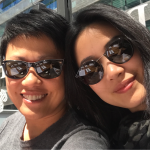 To break up the 8.5 hrs long journey from Marlborough to Dunedin, we opted to spend a night in Christchurch, with a couple of pit stops along the way. Driving straight for more than 3hrs was no fun and the fact that we weren’t in a rush, breaking up the drive to avoid fatigue was a wise thing to do.

The irresistible lure of Giant Sperm Whales and Dusky Dolphins sightings made the coastal town of Kaikōura our first pit stop. Unfortunately, the only sighting we had was some greedy sea gulls tapping persistently at our windscreen for a piece (many pieces) of our fish and chips takeaway while we hid in the car from the heavy downpour… The consolation was spotting some furry seals from a distance lazing in the rain on State Highway 1 en route to Christchurch.

The storm cleared its way for clear skies as we approached Pegasus Bay; we made another quick pit stop at Pegasus Bay Winery to do a bit of wine tasting and leg stretching. We would highly recommend spending some time in its stunning gardens during a visit to this winery.

After a well rested night in Rolleston – a pleasant suburb in Christchurch. We head on to the quirky Victorian Precinct of Oamaru. It was like stepping back in time when strolling along the streets flanked by neo-classical white stone buildings from Victorian era. This historic town has some very interesting shops and cafes which definitely worth checking out.

Almost halfway between Oamaru and Dunedin, we made another stop to take a look at the unusually large and strange spherical boulders on Koekohe Beach. Instagrammers and photographers alike would be delighted to capture these mysterious Moeraki Boulders for sure, we reckon.

Dunedin, the second largest city on the South island greeted us with showers and low temperature 🙁 . The best places to hide from the rain and cold in this university town – Museums, of course!

Once the weather improved, we took the opportunity to visit the ONLY castle in New Zealand – Larnach Castle. A prominent entrepreneur and politician, William Larnach, built this mocked castle in the 19th century. It is now a tourist attraction after the Baker family bought the property in 1967 and carried out significant restoration work.

With limited sunshine, we managed to squeeze in a short but slightly treacherous walk (for some) – Dunedin’s Organ Pipes Walk. In order to enjoy the spectacular views of Dunedin and its surrounding areas, we had to climb up the ‘broken organ pipes’ – almost perfectly formed hexagon rock columns by cooling of hot lava during the volcanic period.

The climb looked frightening but it was in fact relatively easy. The panoramic view of the city on top was worth it, but alas May could only see it from the pictures as she had to retreat halfway due to her fear of heights.

We love peanut butter so before we begin our journey inland to Queenstown, we swung by Bay Road Peanut Butter for their “to-die-for” crunchy peanut butter on thick toast! We swear we could have this everyday for breakfast! It was that good!

Do share your food tips with us! We would love to hear them too!